Hempler received this honor after being named last January’s recipient of the Spahn & Rose Above & Beyond Award. Each month, an employee is recognized for outstanding teamwork, customer service and dedication to the company’s Core Values. Above & Beyond recipients are then eligible to be named Employee of the Year. 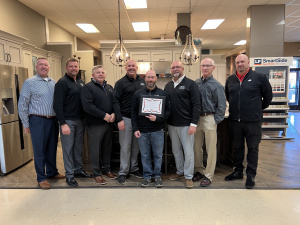 “This is a big honor,” Hempler said after being told he received the award. “It really surprised me but showed me how much faith the company has in me as an employee. I really enjoy coming into work every day, and this makes that feeling even stronger.”

Hempler began working at Dunn Lumber in June 2019 as a Receiving/Inside Sales Representative, and in April 2020 he was promoted to Assistant General Manager. He has almost two decades of experience in the lumber and home-improvement business and has relied on that background to help contractors and builders—and his fellow employees—at Dunn Lumber.

Spahn & Rose acquired Dunn Lumber in February 2019. With the acquisition, two of the region’s longest-standing businesses are now one. Dunn Lumber was founded in 1894 by Edward F. Dunn; a decade later, C.J. Spahn and G.D. Rose founded Spahn & Rose.

“Since Eric started, he has jumped into all aspects of our business, whether accounts receivable, sales, receiving, retail or rental,” says Noah Green, Spahn & Rose Regional Manager. “He will always give the time and effort to find the answer to help make us better, and he always does it with a positive attitude.”

One of the big tasks Hempler tackled was helping with Dunn Lumber’s conversion to BisTrack—a software system that helps Spahn & Rose customers track orders and invoices and coordinate deliveries. Throughout, Hempler gathered information from the Spahn & Rose General Office Information Technology department and helped train Dunn Lumber staff to use the program.

“Once we were able to adjust to BisTrack, we found the overall ease and function of the system can help our customers on a daily basis,” Hempler says. “It’s a timesaver for everyone: It saves us time and our contractor and builder customers time. Everyone is quicker and more efficient.”

The Employee of the Year receives $1,000. Hempler says he has no plans for the prize money yet but may use it for a vacation with his wife.